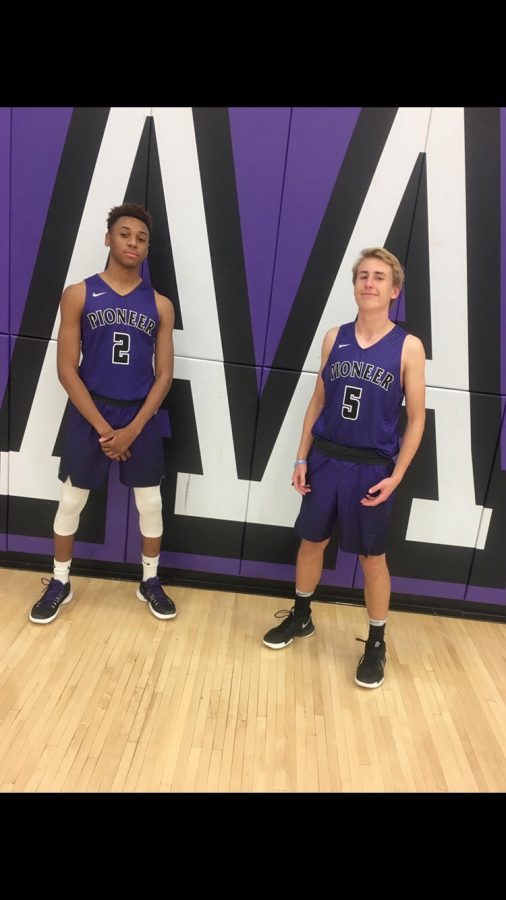 The Men’s Varsity Pioneer basketball team is hoping for a season that pulls the maximum potential out of the team. “I want to develop a team and program where the chemistry, attitude, effort, and coachability all allow us to play to our potential, talent-wise,” said varsity head coach Rich Marion. “If we do that, we have a chance to have a very good year. That is our biggest single challenge, putting all of those things together.” Last year the men’s team had a record of 11-10, and their season ended in a heartbreaking playoff loss to their rival Skyline. This year, especially in the offseason, they are taking the steps for a great season.

The chemistry of the team is something that the coaches and even the players can all agree needs to be improved. “When the team gets to a point where every player realizes how their actions affect the rest of the players on and off the court, that is when a team thrives the most,” said Marion. Senior Varsity player Alex Cunningham’s sentiments were similar to those of his coach, “We need to connect as a team. Last year, we had our downfalls when we were not playing together.” The team has taken strides on improving this chemistry, especially during the offseason. Junior Mac VanRenterghem said, “We have been doing a lot of conditioning and we have been in the weight room a lot. This has improved the chemistry of the

team and the program as a whole.” Another factor contributing to improved chemistry this season is the experience of the team. “We are a lot more experienced, as many players have been playing for at least a year with each other,” said VanRenterghem. When everyone on the team is consistently working together on and off the court, that is when we can be a great team.

All great teams need to be clutch and able to close out games late in the fourth quarter. Players must be able to step up through pain and adversity and be willing to push their team over the top to victory. Losing close games was a theme for Pioneer basketball last year, and the team is ready to turn that around. Coach Marion stressed the importance of late-game situations between teammates saying, “In the fourth quarter, when adversity hits, it is important for the guys to look at each other and know that they will put the work in to come out on top.”  Players also recognize that they need to improve in late game situations. Senior Aidan Wright said, “We have to finish it off in the fourth and know how to play with pressure and the lead.” The offseason training is also a factor that can help the team win big games. With consistent conditioning throughout the entire offseason, the team feels like they are ready to go all 32 minutes. Cunningham is confident that the offseason training will help the team down the stretch, saying, “The work we have all been putting in will pay off when we face adversity in the fourth.”

Finally, the team is making changes to their playstyle that can get everyone involved to increase offensive consistency. Coach Marion described the new offensive playstyle, saying, “Our offense this year will be focused on more ball movement and getting everyone involved. We have many guys that can all score, so finding the best shot is important.” On the defensive side, the team is focused on staying strong and playing together. “We will have a similar defense, but a better version. Our defense revolves around communication and constant movement.” These adjustments may seem minor, but these little changes can propel the team to an exciting season.

With the team putting in the work in the offseason, improving attitude and chemistry, and focusing on finishing in the fourth quarter, they are ready to try their hardest for an outstanding year. “We want to make a statement this year,” said VanRenterghem, “that we are the best basketball team in this city.