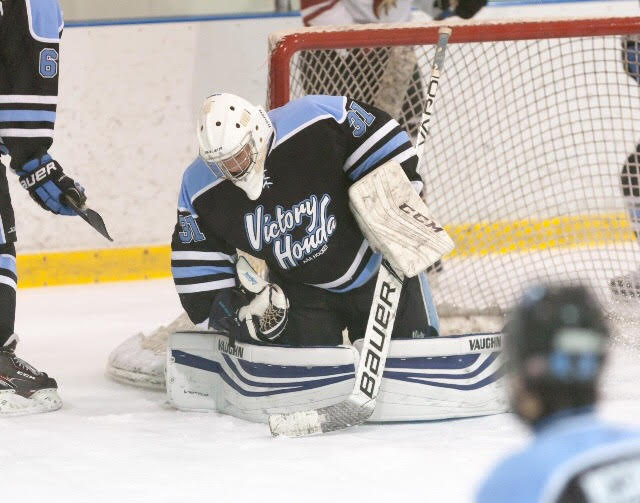 “My earliest memory of playing goalie was when I was about 3. I would set up chairs in my living room and have my sister throw wadded-up socks at me,” says junior Michael “Mikey” Leighton, who has been passionate about hockey nearly his entire life. More specifically, Leighton has always had a passion for playing goalie. “When I watched hockey games growing up, the coolest player to me was always the goalie,” he says.

Leighton started his hockey career at age four. He played in a league at the Ann Arbor Ice Cube with 6-year-olds. That first team went on to win the league championship, and the next year Leighton’s parents were contacted by the coach of a local travel team, the Ann Arbor Wolves, to see if Leighton would like to play goalie for a team of 7-year-olds. This team was a step up for Leighton because now he would have to travel to neighboring cities to play. That year, Leighton says, cemented his commitment to the sport. “We were playing a team that was supposed to blow us out, and I made 35 saves, got a shutout, and we won. Afterward, the coach gave me the game puck, and I realized I was pretty good and that I wanted to play this sport for as long as I could,” he said.

Leighton remained with that team for four years until he was a 9-year-old on a team of 11-year-olds. His last year with the team, Leighton recalls, “We had our best year ever. We went to the AA Howe 1 State Championship, but we lost 5-3.”

The next year, Leighton went to the neighboring Chelsea Chiefs, a team that was one tier above the Wolves in the AA Yzerman Division of the Little Caesars Amateur  Hockey League or LCAHL, the league to which all Michigan youth hockey programs belong. Leighton played only one year above his age group, so he was a 10-year-old playing with 11-year-olds. During this season, Leighton sustained his first concussion from a puck to the head. Hockey goalies are especially vulnerable to concussions, and this would not be Leighton’s last.

“The next year was really weird,” Leighton says. He went back to his old team, the Ann Arbor Wolves, hoping to rekindle the positive experience he had previously, but when the coaches brought in a new goalie, things got complicated. Leighton found himself in a position where he felt powerless to the decisions made by his coaches who were being swayed by the overbearing parents of other players on the team. Frustrated with the drama, he left the team midseason to play for AAA Detroit Compuware.

The Compuware team was Leighton’s first taste of AAA hockey, which is the highest level a youth player can reach. The AAA system is a whole different animal from the AA system, as game travel changes from intrastate to out-of-state, and the tournaments are frequently outside the U.S., often in Canada. With this in mind, Leighton decided to take the rest of middle school online in order to arrange his school day around his hockey schedule. The idea was originally his mother’s Leighton said, and when she suggested it he knew it was the right thing to do. “My parents are great, they suggest things to me, but give me full control to make my own decisions. They are passionate about whatever I’m passionate about,” he says.

The online school system worked for Leighton, and he continued to be a full-time online student until high school. However, the AAA experience was not all that Leighton hoped it would be. He sat on the bench most of the year because he was yet again entangled in ugly parental politics, which can be brutal at elite levels of youth sports. “I was frustrated, but it turned out to be a valuable learning experience,” he says.

The next year, a slightly defeated Leighton dropped back down to AA Yzerman hockey to play with the Novi Ice Cats. It was there that he met coach Bob Sullivan, whom Leighton says “turned my career around. At this point, I was out of shape, I didn’t have any work ethic because I had been told how good I was, and I thought I was better than everyone. I completely took my talent for granted, and it had gotten to the point where I couldn’t get through practice without being exhausted,” he recalls. Leighton says Coach Sullivan was persistent and would not let him skip the workouts and slack off. “Eventually, I felt a shift in my mindset from ‘I’m only doing this so Coach doesn’t get mad at me’ to ‘I’m doing this because I actually enjoy it.’ I felt like we developed a real bond because I was working for him, and he was working for me.” Under Sullivan’s leadership, Novi went on to have a successful season. So successful, in fact, that the next year the core of the team moved up to the AAA level under the new name Victory Honda.

The summer before this season, Leighton says that there was a chemistry and work ethic among the team that he had never experienced before, and he knew that they would do great things. He was right, they went on to win their league championship, as well as three other tournaments. The real significance of the season, though, was that it reignited Leighton’s passion for the game. “After this season, I completely fell in love with the sport of hockey again,” he said.

The next year, however, the team broke up, as some players decided to play for their high school teams instead of AAA. This left Leighton facing a tough decision: hang on to a skeleton team with whom he still had a bond, or dive into the unknown world of high school hockey, where he would be a freshman playing against seniors. In the end, Coach Sullivan made the decision for him by cutting him from the team, telling Leighton he was doing it so he would not get held back and stunted by lower competition. As a result, Leighton stopped taking online school and decide to enroll at Pioneer because, “taking high school classes online can be isolating and that’s probably not healthy.”

At the beginning of his freshman year, Leighton admits, “I was cocky and I was walking around school telling everybody I was going to be the starting goalie.” As a result of his cockiness, Leighton was apathetic in practices, and when the season began, the starting position was not his. “The first game rolls around and Charles [Goetzke] is starting, and in my head, I’m thinking, ‘Oh, he’s a senior it’s the opening game, he has to start.’ But then he starts the second, and the third, and the fourth and the fifth, then the sixth game the other goalie, Patrick, starts over me and I’m starting to get frustrated.” In the seventh game, however, Leighton got his shot halfway through the game and he did well enough to earn himself a start in the opening game of the Ann Arbor Jilek Cup against Father Gabriel Richard when Goetzke was away on vacation. Although Pioneer lost 3-2, Leighton says, “I made one of the best saves of my whole life, it was a back-door, doing-the-splits, glove save.” The save, along with quite a few more, cemented a position for him as an alternating starter with Goetzke.

Throughout the rest of the season, Leighton grew to love high school hockey because of the school spirit and the fact that the fans weren’t all parents like at his travel-hockey games. However, during this season, Leighton also sustained his second concussion from a shot to the head, and the season ended on a sour note with a heartbreaking 3-2 loss to Skyline. Leighton says, “I left the rink bawling my eyes out thinking, I can’t wait for next year, fully expecting to come back. I also didn’t think I was good enough for AAA anymore because I had just played a high school season where I didn’t even start the majority of the games.”

Looking to improve his game over the summer, Leighton tried out for three AAA summer teams: Compuware, Honey Baked, and Victory Honda. To his surprise, he made all three teams which led him to the realization that, “I was only 15 and playing high school hockey against 18-year-olds with 90-mile-per-hour slap shots. It had distorted my self-image.” He chose to play for Victory Honda, which at this point no longer had Coach Sullivan, but he says it was closest to his house. At the end of the summer season, Leighton was starting to have second thoughts about coming back to Pioneer. “What drew me back to AAA hockey was the scouts in the stands and the memory that I wanted to play past high school hockey,” Leighton said. With this in mind, after the fall season, he made the decision not to return to Pioneer hockey and instead shoot higher with Victory Honda. He now calls it “The worst decision of my life.”

Leighton has a few reasons that this season went so poorly for him. Right from the start, he says, “No one bought into the idea that we had to work hard to be a great team. We were all arrogant and thought we were better than other teams. As a result, we did not prepare well enough and started losing games we were not supposed to lose.” As the losses started to accumulate, and the pressure to win was mounting, Leighton felt himself sliding back into his old apathetic ways.

“Hockey wasn’t fun anymore because it wasn’t just a game,” he said. “The locker room dynamic was really bad, there were cliques and arguments between people to the point that it was hard for me to feel motivated to show up to the rink every practice.” On top of all this, over the course of the season, Leighton got three more hockey-related concussions, the last of which ended his season. This brought his total number of concussions to five. Finally, the travel was so brutal that Leighton was forced to take online school again. “There were tournaments every weekend where we’re flying out Thursday and getting back Sunday night, and the majority of our games were out of state in places like Dallas, Chicago, Toronto, Philadelphia and New York,” he said. “On top of that, practices were every day starting around six all the way out in Canton, and they don’t end until 10, so it consumes your whole afternoon and when you get home you just want to sleep.”

Frustrated by the disappointing travel season, Leighton decided to give high school hockey another chance, re-enrolling at Pioneer for his junior year and practicing with the team intermittently over the summer and through the fall. However, shortly before the 2018 season began, Leighton suffered his sixth concussion during practice, an injury that prevented him from being able to participate in tryouts. Now, several months into the season, he is really missing the ice and wanting back on a team. While he acknowledges that six concussions have put him at risk for chronic traumatic encephalopathy (CTE), his love for the sport is stronger than his worry. “Hockey has been my life up until this point so I can’t stop now,” he said. “I’m going to go back, and when I do, I’m going to go as hard as I can so I can take my best shot at making the USHL or playing for a Division One college.”