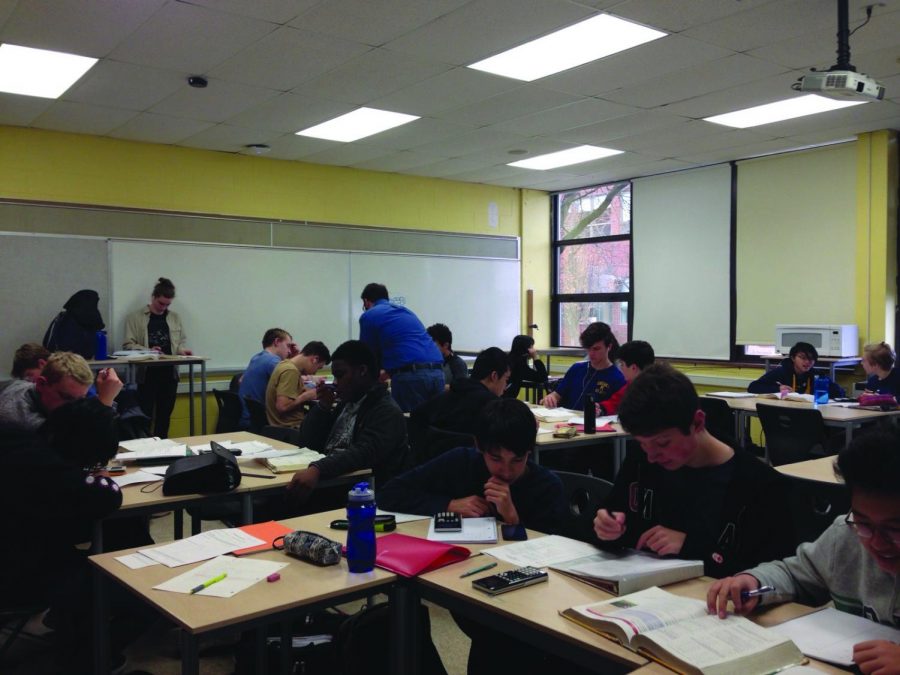 Concerns have risen from Pioneer parents and students over impacted classes and academic performance due to the mid-year staff changes in the Pioneer Math Department because of teacher retirements and a leave of absence.

Classes that had been taught by Divirgilio and Kaercher have been shuffled “to ensure each course has someone strong in the math discipline they are teaching,” said Principal Tracey Lowder in a school-wide email.

As these changes are being implemented, Matthew Rice, a Pioneer math teacher who had his Algebra I class replaced with one of Divirgilio’s classes, shared his frustration about students who are no longer under his teaching.

“My students in Algebra I, we’ve worked together for 18 weeks. They’ve put in a lot of hard work and grew to phenomenal levels,” he said.

Considering his students were mainly freshmen who are still adjusting to a high school environment, Rice referenced their mid-year swap in teacher and class as “going back to square one” and “making a difficult transition even more so.”

The challenges for the school’s Math Department were enhanced with the three-week absence of teacher Michele Macke, which spanned over semester final exams due to an investigation over a student complaint. The investigation was completed and Macke was allowed to return to school on Jan. 30.

“Right at the end of the semester when her expertise was needed most, [Mrs. Macke] was not allowed, and not permitted to be accessible for her students,” said Rice.

Students are feeling the brunt of Macke’s absence. “Mrs. Macke’s absence was really hard on all of us students in her classes. Finals are already a difficult time, so these feelings were definitely augmented by her leave and the confusion surrounding it,” said sophomore Billie Hoffman, a student of Macke.

The day before her return, Macke was finally able to send out an email to the parents of her students. “The last few weeks have been very frustrating for me, and the fact that I was not able to share that information with all of you contributed to that frustration,” she said. “Many of you emailed and texted words of support. You have no idea how much I appreciated that. Many other math teachers stepped in to ensure that your children had a better experience and I also appreciate that.”

Sophomore Jeannie Liu, a classmate of Hoffman, shares the relief of Macke’s return with other students. “Some people, when they got the email last night, talked about how they were in tears and how they were so overjoyed,” she said after Macke’s return. “She gives all the school spirit and gets everyone going; she holds not only the Math Department together but Pioneer as a whole.”

While Macke’s return has alleviated some of the department’s challenges, the decrease in math teachers has taken a toll. Prior to the school year starting, there were already four retirements of long-time Pioneer math teachers.

“The demographics are that there are a lot of people that are teaching now that are older, and there’s very few people entering the school of education,” said Donald Zekany, the Math Department chairperson. “It’s going to be a big concern across the state.”

In a recent report by the Citizens Research Council of Michigan, enrollments in Michigan programs for teacher preparation have declined 66 percent between the school years of 2008-09 and 2015-16. Furthermore, approximately 100,000 state residents have teaching credentials but are not teaching as those 40-50 years old primarily are leading the teaching workforce with fewer people entering the profession each year.

“I think at times we’re not as appreciated in the media. I think we’re also a political football at times and it doesn’t come from one party, it comes from both,” said Zekany. “Young people who are going into education have a rough road and the pay is not as attractive as it once was.”

And despite the departures of the four math teachers before the school year, only two spots were replaced, putting more burden on the school’s staff and administration. One newly hired math teacher didn’t begin teaching until mid-February.

“The real issue of anxiety is that they just all seem to happen this year at once within a few months of each other,” said Zekany. “Normal years you have one person retiring and that’s fine, you find a person to replace them, but this year you have five people retiring.”

As a response to the persisting anxiety of Pioneer’s students and parents with the current situation of the Math Department in the beginning of the new semester, Lowder said in his email, “It is unfortunate that in light of everything they are doing, some have chosen to be critical of what they perceive we’re NOT doing.”

Despite the struggles that the department is facing, Zekany said he is determined to make progress for the future. Currently, a new teacher is expected to start in approximately two weeks in addition to the new math teacher Pioneer has brought in from Pathways.

“It’s not a perfect world. There’s going to be things that happen. A perfect world is when we start with the same teachers and everything goes very fine, but sometimes it doesn’t happen,” he said. “We will come through it.”