Schools close due to coronavirus pandemic 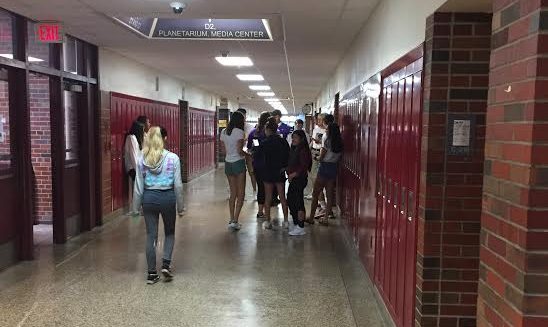 The Ann Arbor Public Schools was the first school district in Washtenaw County to announce a complete school closure on Thursday, March 12, due to the spreading coronavirus (COVID-19), stunning students and staff and sending everyone into a frenzied effort to figure out how to hold school remotely. Other districts soon followed and by that night Michigan Gov. Gretchen Whitmer had ordered the closure of all Michigan K-12 schools, public and private, until Monday, April 6, in response to several confirmed cases of the virus in the state. She also declared a state of emergency in Michigan, which activates a number of state and federal responses.

Students attended an early release day on Friday, March 13, to pick up assignments and textbooks for the three-week closure. In an email to staff and school families, AAPS Superintendent Janice Swift said “These are sobering days for all of us in confronting the COVID-19 pandemic,” and called the situation “unprecedented.” The district had already canceled all extracurricular activities on March 11 prior to the closing announcement. Swift also noted that the closure, which includes the district’s scheduled spring break of March 28-April 5, will last “at least” three weeks.

The closing of schools was an action taken with the intention of slowing the spread of the Coronavirus. Pioneer health sciences teacher Elaine Mitchell explained that slowing the spread will benefit the hospitals.  “There’s gonna be a certain amount of patients, let’s say 100. So you can either have this hundred real quick, or you can spread it out to be longer, which is what they’re trying to do now. They’re trying to lessen or slow down the spread so we don’t put hospitals over capacity.” Mitchell said. This process, frequently referred to as “flattening the curve,” is considered essential to handling the crisis.

Closing schools is just one way that the community is moving to limit the spread of the coronavirus. Along with limiting large groups, people are encouraged to self-quarantine if they show symptoms, or have recently traveled to an infected area. This precaution is vital, but high concern is not yet universal.

“I’m not that worried,” says Sasha Wilson, a sophomore at Pioneer High School,  “I’m young and it seems to be affecting elderly people, young children, and people with compromised immune systems.”

Many people have not been following the recommendations to limit exposure, however. Sophomore Nor Gillard says that it is important to follow precautions for the sake of others. “I think the people who think that this is just an early spring break and can go out to the mall and do all this fun stuff and go to public places are acting very selfish. These people are probably the ones at the least risk,” Gillard said. “If they get sick, they will most likely recover quickly and healthily. but when they are in contact with person A who has asthma, A is at more risk and could develop a severe pneumonia infection and become sick for way longer.”

Although many universities have already moved to online education, the practicality of implementing such a plan at Pioneer was daunting, as many people don’t have experience in such set-ups. “ For universities it’s easy, they’re already set up to move kids mostly online,” Mitchell said. “For us, we have to look at other issues, of accessibility to computers and internet, and things like that.” These concerns also included providing meals to students who rely on school lunches. Arrangements have been made for these needs to be met by providing lunches at 11 locations around Ann Arbor, supported in part by donations from local businesses.

As of Monday, March 16, there were 53 confirmed COVID-19 cases in Michigan, including one each on the University of Michigan and Michigan State University campuses. Washtenaw County has a reported seven cases with many more test results yet to come. Gov. Whitmer, in press statements, has told all state residents to “assume” they are carrying the virus to emphasize that extreme social distancing must occur to stem the spread.

With 3,485 coronavirus cases now reportedly in the U.S. — and 65 deaths — according to the Centers For Disease Control, many people are beginning to panic and flood stores to stock up on supplies. Worldwide, CNN reports that 6,500 people have died from the virus. Typically, patients who have been confirmed to have the virus have experienced mild to severe respiratory problems, including: fever, cough, and shortness of breath,

Coronavirus is a respiratory disease, commonly transmitted to humans from animals. This particular strand, COVID-19, is believed to have originated in Wuhan, China. It has developed into a global pandemic, causing a hold on international travel from places that have had identified cases of coronavirus. The virus has hit hard in countries in Europe and Asia, and has more recently been tracking across the U.S.

In Ann Arbor, the Washtenaw County Health Department oversees the county’s COVID-19 readiness. “The health department takes over,” said said Pioneer school nurse Lauren Huissen. On Monday, March 16, the county health department ordered all bars, restaurants, entertainment venues, and gyms to shut down, and all groups to be limited to 50 people, until April 5 to encourage social distancing.

For now, experts continue to recommend social distancing – staying away from public places as much as possible — and definitely avoiding places with large groups of people. In addition, risk of infection can be lowered by avoiding touching your eyes, nose and mouth, as well as frequently cleaning hands with soap and water, or disinfecting with hand sanitizer to prevent the risk of infection. Local and federal health officials also call for citizens not to panic.  “I don’t think we have to be super concerned,” says Huissen. “You just have to have awareness.”