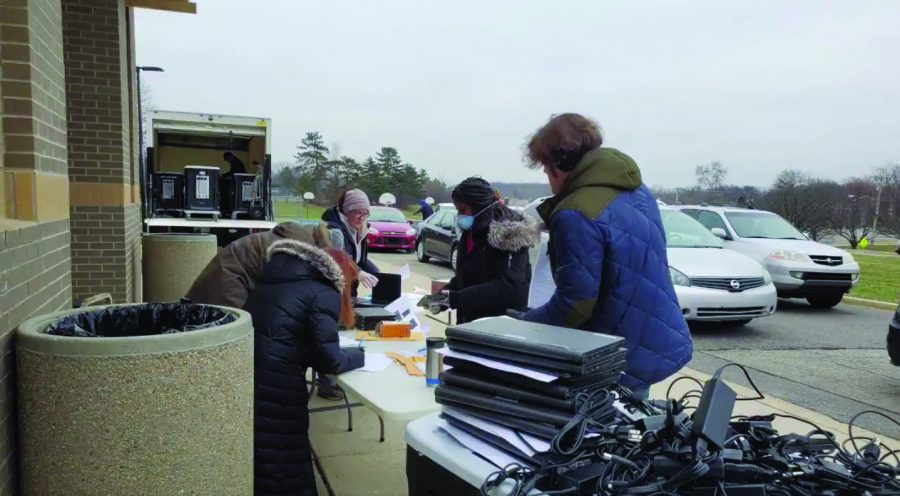 Volunteers sign out computers to families at Tappan Middle School on March 24.

Amid the statewide school closures due to the COVID-19 virus, the Ann Arbor Public Schools have been distributing technology equipment to its nearly 20,000 students, many of whom may not have access to devices and internet service needed for online learning.

To date, the district has distributed a total of 1,850 devices, including Chromebooks and iPads. The final distribution in this first phase was at Tappan Middle School on Tuesday, March 24, as the pick-ups scheduled for the remainder of the week were cancelled due to Michigan Gov. Gretchen Whitmer’s executive order of the stay-at-home policy.

Chad Bertelson, AAPS manager of Mobile Computing and Instructional Integration, said in a video about the technology drive that the distribution was “very successful” as around 550 Chromebooks and iPads were distributed to families at the Tappan site alone.

“At one point, cars were wrapped around the block, into the neighborhoods and going out onto Stadium,” Bertelson said. “It was amazing, probably a half mile line and we flew through it as quickly as we could.”

Over the course of two weeks, the district has provided distributions at several other locations including Burns Park, Pattengill, and Lawton elementary schools, Forsythe and Scarlett middle schools, and Pathways and Skyline high schools.

In preparation for these distributions, students were asked to fill out a technology survey the final day before the school closure on Friday, March 13, regarding the type of technology they had access to at home, and how many people would be using it. The survey link was also sent out to all families in case students were absent from school that day, and families were able to pick up devices even if they had not filled out the survey.

Natalie DePasquale, a teacher at Lawton Elementary School, offered to volunteer at her school’s technology distribution with her daughter, Chloe Durkee, a junior at Community High School.

“The volunteers at our site were very upbeat and the families were grateful.  The process was very well thought out and the distribution ran smoothly,” she said. “Every school has this tech, so the machines are the ones the kids are already using in their classes.”

At the pick-up locations, families were asked to remain in their vehicles while the volunteers came to them personally with a form for information of their student’s name, school ID number, address, and their signature. With masks and gloves, volunteers also ensured to offer a new pen to each family to prevent possibilities of spreading the virus. The devices and forms were all inventoried with tag numbers to track which device was sent with which family.

“I think the people of the AAPS have worked really hard––tirelessly!––to make sure that every student has what they need to access instruction and curriculum should we be closed for a long period of time,” said DePasquale.

In general, iPads were given for students from kindergarten to second grade, while Chromebooks were handed out for students from grade three and above. For Pioneer students, the effort has shown an impressive dedication to the needs of the district’s students.

“I feel like the district has done really well to make an effort to distribute a computer to each student in need, and has made it really accessible for families,” said Pioneer senior Lauren Batra. “I also appreciate how fast they were able to distribute computers, and how there is no cost attached.”

Bertelson offered his appreciation to all the families and volunteers who have contributed to this effort.

While the district has stopped the technology distribution for the time being, Bertelson hopes to continue once the travel ban from the governor is lifted. As for now, the district’s Information Technology team has established a technology helpdesk hotline for families at 734-997-1222 from 7:30 a.m. to 7:30 p.m. each weekday.