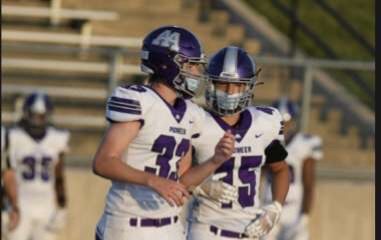 When fall high school sports were reinstated Sept. 3, athletes were elated. Pioneer senior and soccer player James Cameron said, “Our spirits are high and we are super excited to be back out on the field.” However, every sport has felt the effects of the regulations that came with the reinstatement and they have had to adjust to an unprecedented season.

One of the most visible rules is athletes in contact sports like football and soccer are required to wear masks during practices and games. According to the World Health Organization, people under 18 should not wear masks when participating in sports or any physical activities because it can cause breathing difficulty. But Athletic Director Eve Claar said the mask rule at Pioneer has worked out so far.

“While I was nervous going into this fall season, I have received no complaints regarding playing with masks,” she said. “Pioneer kids are more than willing to do whatever it takes to play the sports they love. They understand the gravity of the (COVID) situation.”

This sentiment was echoed by varsity football Offensive Coordinator Luke Brindle who said the players have been cooperating. “Although masks certainly feel funny, we have had no uprising from our players. Football with masks is better than no football at all,” he said.

Senior football player Jared Kinscherf summed up the rule best when he said, “Masks make it harder to breathe, but not too hard.”

Contact sports have compensated for breathing difficulties in practice by increasing the amount of water breaks and breaking the practice into smaller numbers by practicing with players of the same position. In games, however, the mask rule can get sidelined pretty quickly. According to the Michigan High School Athletic Association, referees are not required to wear masks, use electric whistles, or enforce mask wearing by players, coaches, or spectators. Cameron said that in a game this can result in “a lot of masks being pulled down or partially worn.”

The responsibility to ensure COVID safety then falls on the individual teams. Kinscherf and Cameron say that rules like not refilling water bottles or being socially distant on the sidelines are only enforced by Pioneer coaches and administrative staff watching the game.

The regulations on fall sports have not just caused logistical adjustment, but also have required an emotional adjustment to the new environment of the sport. Cross Country runner Grace Jackel said there are definitely things she misses. “Our meets have become dual meets, so we miss out on the competitiveness of running against more girls,” she said. “We also have to stay distant at practice, which takes away from the team bonding.”

While she agrees with everything that is being done to keep people safe, Jackel said she longs for a normal sporting environment. “I would run a marathon if it meant I could get my sport back to normal,” she said.

Pioneer senior and soccer player Cameron says he sees a big difference in play with the new rules as well. “The sport loses a lot of emotion with the masks on,” he said. “Normally we would celebrate our goals and wins with hugs and screaming, but now we just high five.”

Like Jackel, he said he’ll continue his sport despite the inconveniences. “I am fully willing to do what it takes to play my sport at all, but I’d give a lot to get it back to normal,” he said.

The biggest loss that echoed across all sports, however, was the district’s ban on spectators in all of the school’s fields, pool, and gyms.

Coach Brindle said the fans are such a big part of football. “What I miss most about this season is the Friday night lights,” he said. “I was looking forward to all of the students, especially the seniors, who would show up and make the student section crazy.”

He added that when it is finally allowed, fans will bring a lot to the experience. “I hope that whoever is in charge considers at least allowing senior parents to come to the games because both they and their kids have given so much time and effort to the program,” he said.

Kinscherf feels the same way. “Holloway is a big stadium, I think we could have some fans socially distanced,” he said.

Pioneer Athletic Director Claar said she, too, is looking forward to when normalcy returns to sports. “We are taking it day to day and looking at the experts, but I have nothing but optimism for the future,” she said.

And Claar adds that, ultimately, she chooses to see the current situation through a positive lens. “I’m just trying to be grateful for every day,” she said. “When you have the perspective of an entire lost spring season it feels great to have games going at all.”