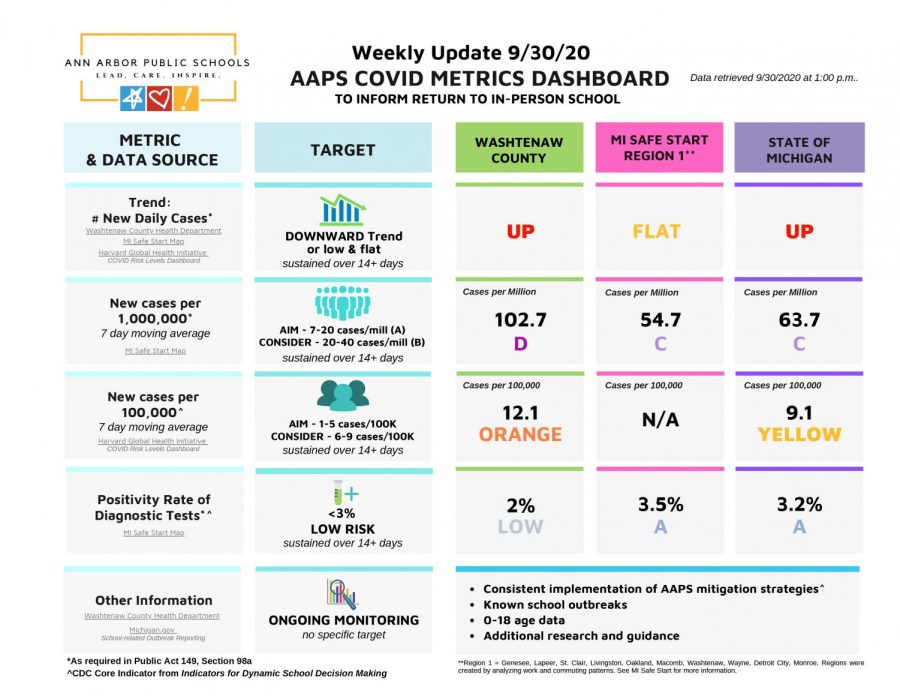 The Ann Arbor Board of Education unanimously approved Sept. 30 the elements that must be in place in order to allow for the district’s return to in-person school in the spring.

The conditions in the proposal are being monitored by Superintendent Jeanice Swift. Weekly updates will be posted to the AAPS “Data Dashboard.” Once the proposed conditions  are met, cases will have to hold steady for 14 days before AAPS can start transitioning to in-person learning.

The requirements include the number of new daily cases, cases per million, cases per 100,000, and the test positivity rate, along with constant monitoring of cases among school age children. As of Oct. 7,  Ann Arbor has only met the target of  test positivity rate. However, the district has announced that the metrics “serve as guideposts for monitoring risk in our community and region rather than as strict thresholds.”

Once the district determines that circumstances are safe enough to gradually phase back to in-person learning, it would start a three-phase plan.

Students in pre-K to second grade would first start in-person instruction, along with “willing students and families who are in most need of in-person learning – for whom virtual learning is the most challenging.” This would include students needing special education services and English language learners, among other groups.

If cases were to remain constant for three more weeks, grades 3-5 would start in-person instruction, and three weeks later if cases were still constant the district would “continue [the] transition process to in-person learning with Secondary schools, beginning with middle school.”

While the news is welcome to many families, some parents say they have been displeased with the way the district has been handling the current school situation regarding COVID.

“It is really unacceptable that the schools are closed, particularly for our younger children,” said Alexandra Rucousca, a parent who spoke at the Sept. 30 school board meeting. “You are choosing to negatively affect our children’s future and our nation’s future.”

Other parents expressed similar criticisms. “The science is clear, therefore we would like in-person school to resume,” said Ellie Merkling, another attending parent. One parent went as so far as to boast that after AAPS decided to start school fully virtual, she transferred all her kids to in-person private schools that they were “thoroughly enjoying.”

At the meeting, Trustee Simone Lightfoot defended the proposed metrics for returning back to school, as well as the board’s decision to keep school virtual for the time being, saying that these decisions are “like peeling an onion.”

“We have to manage all these little nuances that the public never even sees,” added Trustee Glenn Nelson, who supported Lightfoot in her assessment of the situation. “I do want people to know that there are people emphasizing both parts of the risk. Some emphasize the risk to the students of being virtual rather than face to face. Others emphasize the infection risk associated with face to face compared to virtual. I’m thinking about this tradeoff literally every waking hour. Some mornings I wake up and realize I’ve been thinking about it all night; about what this tradeoff is. It isn’t easy. This is a difficult decision.”

Fred Klein, president of the Ann Arbor Education Association, the teachers’ union, also supported the district’s decision. “Our position on teaching during this pandemic has always been to prioritize the health and safety of our students and staff by remaining in a remote virtual instructional model, until science and data determine that it is safe to return to in person instruction,” said Klein. “Going back to in-person learning without adequate testing and tracing, in a city with one of the largest university populations in the country, is not a viable option without threatening the health of our most vulnerable community members. Over 80% of our members are not ready to return while this rise in cases continues.”

Students have mixed feelings about online school and going back to in-person learning. Some are struggling with online schooling from a mental health perspective.

“Each day is becoming more and more difficult to move through,” said Pioneer junior Jonah Seinfeld. “It’s hard to stay concentrated the whole time.” Yet, Seinfeld said that he would be “pretty worried” about going back to in-person school in this current time.

“If we do go back and someone gets sick, everyone’s going to have to be screened,” said Jun.

Other students say they are content with the current virtual school system.

“I’m not in a rush to go back to school,” said junior Vivian Vanrentergem, who said online school has given her more autonomy and less work than regular school did.

Vanrentergem also worries that a return to school would be risky for the community as a whole. “One person’s risk would be everyone’s,” she said.

Despite the differences in opinions, a common understanding among the district’s school board members is the uncertainty about what the future will hold.

“I am firmly convinced our plan is the right plan in terms of sequencing,” said Nelson. “I’m also convinced that looking at that curve, no one knows for sure where that’s going to go.”