Re-signing Harbaugh is the right choice 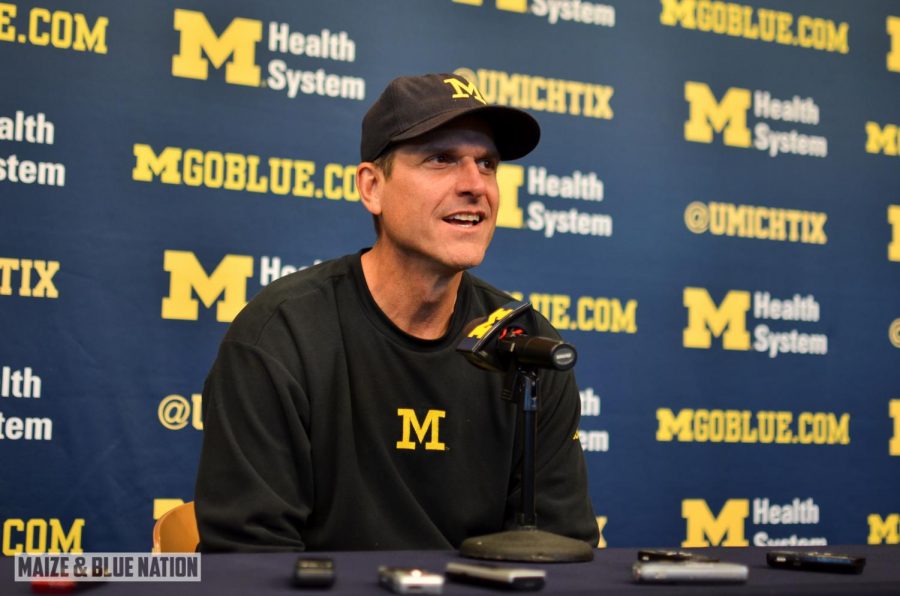 On January 8, 2021 the news broke on Twitter that Jim Harbaugh accepted a four year contract extension with the University of Michigan. This announcement was met with scorn from Michigan fans and mockery from others, most notably the Ohio State twitter account who replied with a picture of their running back, Trey Sermon, smirking. Most of these responses were based on the abysmal 2-4 season that the Wolverines had, which included another heartbreaking loss to Michigan State. However, considering the recent history of the program, negative impact on recruiting, alternative options, and the actual content of the contract proposed to Harbaugh, re-signing him was the right move.

The most prominent critique against Harbaugh is that he can’t win big games, whether they be against that school to the south, our little brother to the North, or bowl games. Sports media and Michigan fans often highlight statistics showing he is 0-5 against Ohio State, 3-3 against Michigan State, and 1-4 in bowl games. These are people caught in memories of the past when Michigan football was a perennial powerhouse who consistently went to the Rose Bowl. Ask anyone born past the year 2000, though and they will tell you a different story about the program. Over the course of the last fifteen years, Michigan has won a single game against Ohio State in a year when they were unranked and had a losing season. The Buckeyes’ dominance extends far past Harbaugh, Hoke, and Rodriguez, and even bleeds into the last four years of the revered Carr administration. As for Michigan State, prior to Harbaugh’s arrival Michigan’s record was 1-6, which last time I checked is worse than 3-3. Finally, in bowl games Michigan was 2-7 before Harbaugh showed up and that is not including the three years that Michigan had a losing record and did not qualify for a bowl game. Michigan’s woes in important games did not start with Harbaugh, but those who remember a better time choose to have a short memory and place the entire burden on his shoulders.

Secondly, while Jim Harbaugh is often critiqued regarding his player development and in-game playcalling, he does have the undeniable talent of being a great recruiter. Since Harbaugh was hired to the program in 2015, Michigan has had the eighth best recruiting class in the country on average, making them and Ohio State the only Big Ten schools in the top 10. Despite their rough season, this trend does not seem likely to change with Michigan still projected to have the ninth best recruiting class in 2021. The five years prior to Harbaugh’s hiring, Michigan’s recruits were ranked five spots lower nationally. Furthermore, it is a known phenomenon that the firing of a head coach does massive damage to the recruiting class of the next year. The transition between previous Michigan coaches Brady Hoke and Rich Rodriguez resulted in a recruiting class that was five times worse than the previous year and after Rich Rodriguez’s firing, Michigan recorded the worst recruiting class in over twenty years. This all means that replacing Harbaugh would not cause the immediate return to glory days that Michigan fans dream of. In fact, the program would guaranteedly get worse before it got better because recruits do not want to join a team that has both been performing poorly and is uncertain about its future.

Oftentimes college football fans like to complain without offering solutions, but in the case of Jim Harbaugh, several fans and football analysts have put forth coaching candidates that they believe would be superior. The number one name across all of these lists is current head coach of Iowa State, Matt Campbell. The case for Campbell is as follows: he adopted a 3-9 Cyclones team in 2015, led them to an 8-5 season only two years later, and in 2020 he brought them within a single score of the Big 12 Championship. However, this is only his second head coaching job after four years in Toledo, and at Iowa State he has an overall record of 31-27. Jim Harbaugh had a very similar trajectory at Stanford, inheriting a 1-11 team and turning it into a 12-1 team in two years less than Campbell. Furthermore, he remained more consistent with improving seasons all four years and an overall record of 29-21, including defeating number one USC in what was statistically the greatest upset in college football history. Following that job, Harbaugh was tested at the highest level, the NFL, and succeeded with a 44-19-1 record in four seasons. Only then did he become the head coach at Michigan and has since produced a similar winning percentage with a record of 49-22. Campbell is too inexperienced and it has been proven by Rich Rodriguez and Brady Hoke that when Michigan hires a seemingly successful coach from a lower tier conference like the Pac 12 or Big 12 it ends in disaster. All other reasonable alternatives are equal or greater unknowns than Campbell and are simply unprepared for the average level of competition from the Big Ten much less Ohio State.

Now, for all of the praising of Harbaugh I have done throughout this piece, as a Michigan fan, overall I am unhappy with his performance. When he returns to the team I would like him to be skating on thin ice and highly motivated to create better teams. This is exactly what the contract he had signed with Michigan achieves. It has a base salary of four million dollars, which is a large pay cut considering Harbaugh’s 2020 contract prior to Covid-19 was supposed to pay him eight million dollars. It has incentives that could allow him to reach around that salary again, but almost three million dollars are only available to him if he secures a national championship. Thes written bonuses should motivate Harbaugh, but more importantly by taking the pay cut he is doubling down on his commitment to improving the Michigan football program and showing that it means more than a paycheck to him. Harbaugh could have likely made closer to a seven million dollar salary in the NFL by coaching for a team like the New York Jets. Furthermore, the contract has a relatively low termination buyout of four million dollars in 2021, with the cost dropping by a million dollars for each year that Harbaugh coaches. This means that if things continue to go south, Michigan can tear up the contract far more easily than before.

All of these factors make re-signing Harbaugh the strong and obvious choice not the weak and forced one that Michigan fans and media are making it seem to be.