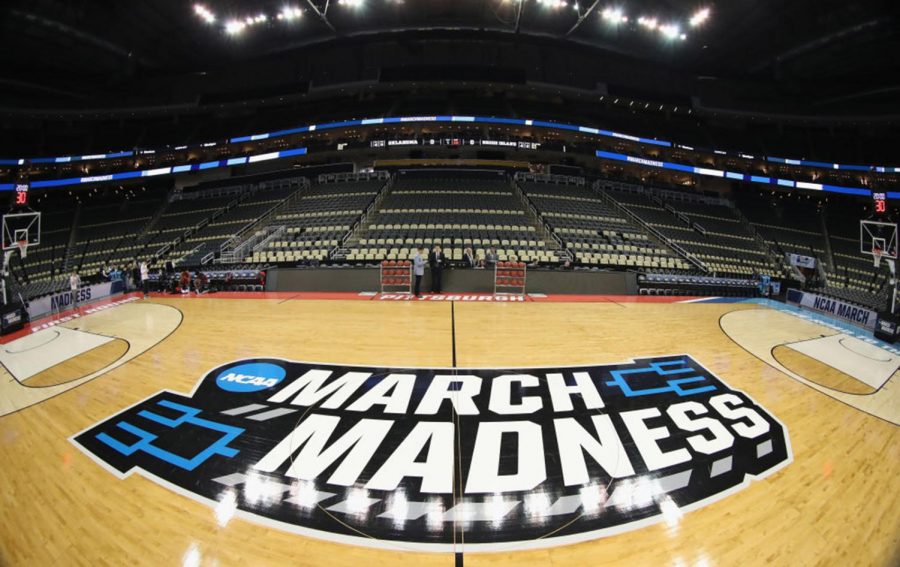 Attendance at NCAA tournament games will be limited. Photo from Tribune News Service

This year the Cinderella’s have become the favorites, and the traditional national powers their prey. Duke, North Carolina, Kentucky, Kansas, UCLA and Michigan State have all stumbled through less than ideal seasons, while teams like Alabama, Arkansas, Oklahoma State, and Loyola Chicago have surged to the head of the pack. Even experienced teams who came into the season underrated like Michigan have succeeded far beyond what the preseason polls thought they could. With the downfall of the Blue Bloods, the odds of a first time champion have gone up exponentially.

Michigan may have been the team that benefited from this odd season more than any other in college basketball. Head Coach Juwan Howard will undoubtedly win national Coach of the Year Honors as his team has been led by five key seniors (however that number has recently dropped to four). The seniority and experience of their team has without question helped provide much needed stability in a season where younger teams, like their rival Spartans, have been plagued by inconsistency throughout the year.

That being said the story of the year and of the tournament will be the unbeaten, top overall seed Gonzaga Bulldogs who will be vying for not just the National Championship, but for one of the greatest seasons in sports history. The Bulldogs have been atop the polls from start to finish this season and have won almost every game they’ve played by double digits. Gonzaga’s chances begin to look even stronger when compared to the major flaws of the other top teams.

This year’s set of one seeds share only one national championship (Michigan in 1989) and only one team has an active tournament appearances streak longer than a decade (Gonzaga). Furthermore, any children born during Illinois’ last Sweet Sixteen run are now old enough to have their own drivers license, and then there’s Baylor, historically the mediocre “tofu” of college basketball who somehow managed to win their first conference championship in 70 years and secure a one seed in the process. To say that this year’s one seeds are collectively light on historical achievement would be an understatement. It isn’t necessarily a bad thing for college basketball though, teams that are usually afterthoughts like Alabama and Oklahoma State will be getting national exposure on a level their hoops teams have never seen before.

However, the Blue Bloods aren’t completely out of the picture. Michigan State, led by junior wing Aaron Henry, has come on strong with three wins against top five opponents in the last two weeks of the season. Kansas, after falling out of the AP Top 25 for the first time in over a decade, will enter the tournament as a three seed. Carolina will slip in as an eight seed and UCLA as an eleven.

Not every marquee program managed to sneak into the tournament. After briefly being below .500, Duke was surging at the end of the season before a Covid case within their program effectively ended their season, breaking their 24 year tournament streak. Kentucky… well, Kentucky has another touted recruiting class coming in next year so at least there’s that.

In a season where almost nothing has made sense, one thing is for certain, there will be plenty of chaos before the dust has settled.