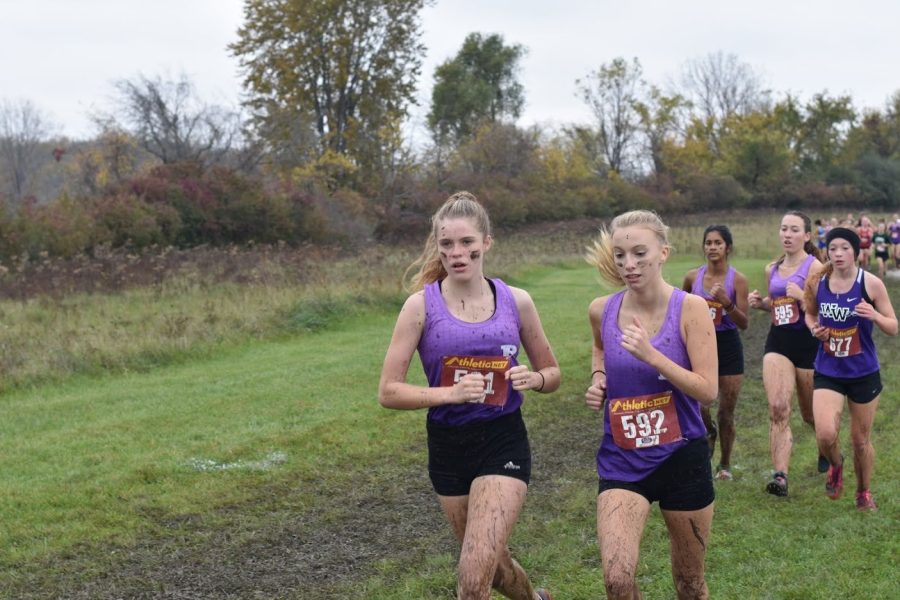 On Nov. 6 at the Michigan International Speedway, the Pioneer women’s cross country team took home the Michigan Division I state championship for the third consecutive year.

“I am so proud of the girls,” coach Nancy Boudreau said. “All of them worked so hard all season.”

The race at MIS included 28 of the state’s top teams and a number of individual athletes whose teams did not qualify. Despite the stiff competition, Pioneer entered the race as an overwhelming favorite.

Junior Emily Cooper said the team was aware of the public’s expectations on them. “We were predicted to come in first the whole season, so there was a lot of pressure for us to win,” she said.

Despite the pressure, Pioneer handled the race with ease, placing three runners in the top 12, and six in the top 60.

“The whole team was very close, and everyone supported each other,” said Boudreau. It was just an honor to be associated with the group.”

Sophomore Rachel Forsyth took first in the state with a time of 17:09.32, a Michigan Division I record for sophomores. Joining her near the top were her sister, senior Sarah Forsyth, who ran to a top 10 finish (18:02.86) and senior Cookie Baugh who took home twelfth place (18:16.55).

In addition to Cooper, sophomores Natalie Mello and Katie Hume along with senior Charlotte Batra helped wrap up the team competition.

An impressive showing at states helped Pioneer conclude an incredible season. “Varsity went undefeated this year, which I cannot remember ever happening before,” Boudreau said.

With this year’s championship, Pioneer became the ninth school in the Lower Peninsula to win at least three consecutive state cross country titles and one of just four to hold at least six all-time.

Cooper said that this success over the past few seasons has put Pioneer’s program on the map. “There’s definitely going to be a lot more people watching our program now that we’ve won three times in a row.”

“On Monday practices, we run hills, and on Wednesday, we do a workout which basically means we run a set distance multiple times at race speed. All the other days we just run 3-5 miles.”

Junior Claire Stanko said the attention is well deserved. “We did well in practice and it showed during the race,” she said. “We earned the state title from how much work we constantly put into running.”

Boudreau agrees. “It takes a lot of dedication and lots of hard work,” she said. “It’s hard to win championships with a lot of individuals working for themselves. Our group of girls definitely worked as a team and were very supportive of each other.”

Looking to next season, Boudreau said winning a fourth straight title will be challenging. “We may not get the championship again next year, but we should definitely be in the hunt,” she said. “We have a solid core coming back and hopefully we will get some girls back who were injured this year. We also have runners from this year who we expect to make big strides next season.”

Cooper is optimistic that the new eyes on Pioneer will be impressed. “We had a big turn out for new runners this year,” she said, “And we’re supposed to have a really good team next year. It’s exciting.”