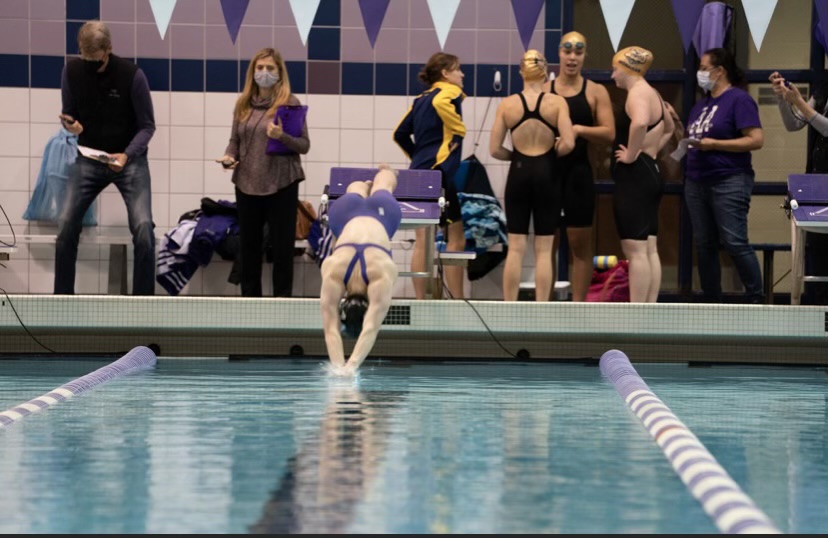 Lily Cramer dives into the water to start a race.

Ranked number one in the state and the country, the women’s state swim team includes several athletes who will leave the Pioneer pool to swim at Division I schools next year after enduring an unprecedented – and stressful – pandemic recruiting process.

The team’s Class of 2022 has been described as a rarity by coach Stef Kerska, who said all the pieces were in place for the team’s top performance this year. “There has to be a lot of great things that come together,” she said. “You’ve got to have a fairly talented and dedicated group. That group needs to have role models and upperclassmen that show them the way, set the expectations, and create the culture in which they can develop into the class that they are.”

When senior Autumn Bullinger recently announced her commitment to swim for the University of Vermont, she couldn’t help but think about how the stress that comes with the recruiting process is often overlooked.

At first, Bullinger says she was afraid to announce who she would swim for. “I was just worried about what people were going to think,” Bullinger said. “That’s the side that people don’t tell you about the recruiting process. It’s very vulnerable and scary.”

Bullinger’s mother, Jodi Bullinger, the 9th grade dean at Pioneer who also was a college athlete, knew the process would be stressful for her daughter, so she helped guide her. “(I told her) here’s how you make the decision, not what decision you need to make,” said Mrs. Bullinger.

She said she never doubted Autumn’s ability to balance academics and sports in college, because she’s been doing it since she was 8 years old. “I didn’t have any concerns because I don’t know what it’s like to be a regular college student. My dad was a college athlete. I was a college athlete,” said Mrs. Bullinger. “The biggest thing was that I want my kid to be happy – I want this experience to be positive.”

Autumn Bullinger found herself frequently weighing the pros and cons of committing. “Do I want to take on this huge responsibility for the next four years? Or do I want to finally have a period in my life where I’m not always swimming?” she wondered.“I went back and forth for a lot of my years.”

For Cramer, on the other hand, her official visit at Rice University quickly cemented a commitment from which she hasn’t looked back. “It was pretty much set in my mind that I wanted to swim in college,” said Cramer. “After talking to the girls on the team and seeing the campus, Rice checked all of the boxes.”

The recruiting process isn’t solely about athletics. Finding the right academic fit and location plays a major role in these decisions. “I spent a lot of time thin-ing about where I wanted to be, figuring out what I wanted to do,” said Bullinger. “I have to go to a college that’s going to provide the degree programs I’m interested in. At the end of the day I’m going to college to get a degree.”

When the pandemic hit, the NCAA extended their “dead” period during which potential student athletes were unable to go on official recruiting visits. This forced many athletes to make trips to the universities on their own. For Bullinger, going on these unofficial trips was extremely informative in her decision. “I just fell in love with Burlington. I could see myself being happy there,” she said.

Although the pandemic kept them from many of the perks of a traditional recruitment process, the girls found other ways to make things work. “We had a couple of phone calls and then I had a Zoom meeting with some of the girls on the team,” said Cramer. “I started talking to the coaches more, and then I went down to visit.”

Zoom became one of the best forms of communication throughout the commitment process. For Bullinger, meeting with other teammates online was a crucial part of making her decision.

“I had a few Zoom calls with the girls on the team, and I really liked them. I think a huge part of the process is making sure you’re going to mesh with those people,” Bullinger said. “I already spend more time with my teammates than I do with my family. I wanted to make sure that wherever I go, me and my teammates are gonna get along and have the same interests.”

As the recruitment process ends for many of the girls on the swim team, many say the closing chapter at Pioneer is indeed bittersweet but they’re happy to be taking their swim skills with them. “I signed up to swim for another four years,” reflected Bullinger. “I’m really excited––not a lot of people have the privilege to say that they are a collegiate athlete, so I carry a lot of pride in it.”